Facebook
How the Pandemic Has Impacted Thoughts About Senior Living 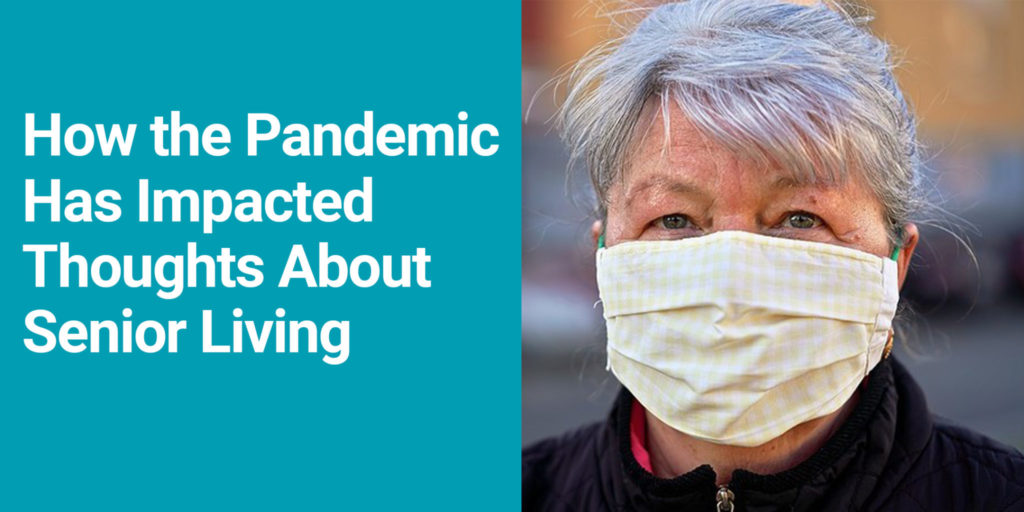 The COVID-19 pandemic has impacted nearly every aspect of life with many people becoming sick, losing loved ones, losing jobs, and/or struggling with childcare. Throughout all of this, I have been mindful of how the pandemic is affecting people mentally, especially seniors who are in the highest-risk category for the virus. And I’ve also wondered how people’s perception of the senior living industry as a whole has been impacted.

Plante Moran Living Forward, a development advisor that specializes in addressing the evolving needs of senior living communities, and Retirement DYNAMICS, a senior living marketing and consulting agency, recently conducted a fascinating study. To examine how the pandemic may have affected people’s decisions to live or work in a senior living community, they surveyed three key populations during June and July:

(It’s important to note that the survey only included independent living residents, not those in assisted living or skilled nursing facilities.)

Plante Moran Living Forward and Retirement DYNAMICS received feedback from over 5,000 current senior living residents and prospects, as well as staff members. Their findings on a number of topics were quite interesting.

One of the first things that jumped out at me was survey respondents’ feelings of social isolation. As you know, many cities across the nation imposed strict quarantine restrictions on residents starting in mid-March. Home to some of the people most vulnerable to severe cases of COVID-19, many senior living communities also went on near-lockdown. Most outside visitors were prohibited, and residents were required to remain on campus or complete a mandatory isolation period upon return if they opted to leave. Yet, for those in independent living in particular, I know from talking with so many residents that despite these restrictions the overall sense of community remains strong. So I was curious to know how many residents reported feeling isolated compared to those in their homes.

Of the survey respondents who currently live in a senior living community, 68 percent noted that they have felt some degree of isolation during the pandemic. But among those still living in their own home, 61 percent also said they had felt socially isolated. So yes, there was a difference among the two populations, but it wasn’t as stark as some might have expected.

Also of interest were people’s feelings of safety during the pandemic, and on this topic, the benefits of living in a community versus living on your own become clearer.

Among senior living prospects (who still live in their own home), 60 percent shared that they have been fearful of going shopping amid the pandemic. Many prospects also have felt overwhelmed by the additional menu planning, food prep and cooking, and cleaning that they have felt they needed to do during this time.

Another interesting finding of this survey relates to prospects’ perspectives on their move and their timeframe for moving to a senior living community.

More than half of prospects (57 percent) said they were glad that they had made the decision to stay at home, versus being in a senior living community during the pandemic. But interestingly, more than one in three (35 percent) said they were unsure of that decision. Also of note, most prospects (74 percent) shared that the timeline for their senior living move was unchanged by the pandemic.

So, what would move up a prospect’s timeline for relocating to a senior living community? Well, the most common factors were:

The Plante Moran Living Forward and Retirement DYNAMICS survey also had some insightful findings from senior living community staff members. Keep in mind: These folks are somewhat objective observers of how senior living communities have handled the unusual circumstances brought about by the pandemic.

While there were some opportunities for improvement mentioned (such as streamlined processes for communication with residents’ families), staff feedback about senior living communities’ pandemic response was very positive on the whole.

I know that this has been a challenging six months for many seniors. For those living on their own, there have been feelings of social isolation as towns shut down and imposed quarantine measures. Many of these seniors have felt anxiety about making trips to the store, and some have experienced an additional burden of cooking as well as increased cleaning to keep their homes safe.

Those who live in senior living communities, including continuing care retirement communities (CCRCs, or life plan communities) have had their own COVID-related challenges. The pandemic has necessitated the implementation of restrictions on visitors and travel, as well as on-site group activities — changes which have no doubt been difficult for residents of these communities.

But it appears that many senior living residents are taking these safety measures for what they are: a means to keep them safe and healthy.

The Plante Moran Living Forward and Retirement DYNAMICS survey shows that while there are areas that could use some improvement (such as use of technology and alternative socially distant recreation options), overall, senior living communities have done a good job of supporting their residents and staff during the pandemic. Residents feel safe and well-cared for, and they remain happy with their decision to move into the community, and staff members are glad to work there.

I think the results of this survey say a lot about the resiliency of residents of senior living communities, as well as the compassion and innovation of their staff and management. The world turned upside down in March, but residents and staff have quickly implemented and adapted to these safety measures, and I have no doubt they will continue to persevere until we reach the end of this tunnel.

*This blog was reproduced with the permission of the author, Brad Breeding. Brad Breeding is president and co-founder of myLifeSite, a North Carolina company that develops web-based resources designed to help families make better-informed decisions when considering a continuing care retirement community (CCRC) or lifecare community.