Potential Health Benefits of Living in a CCRC 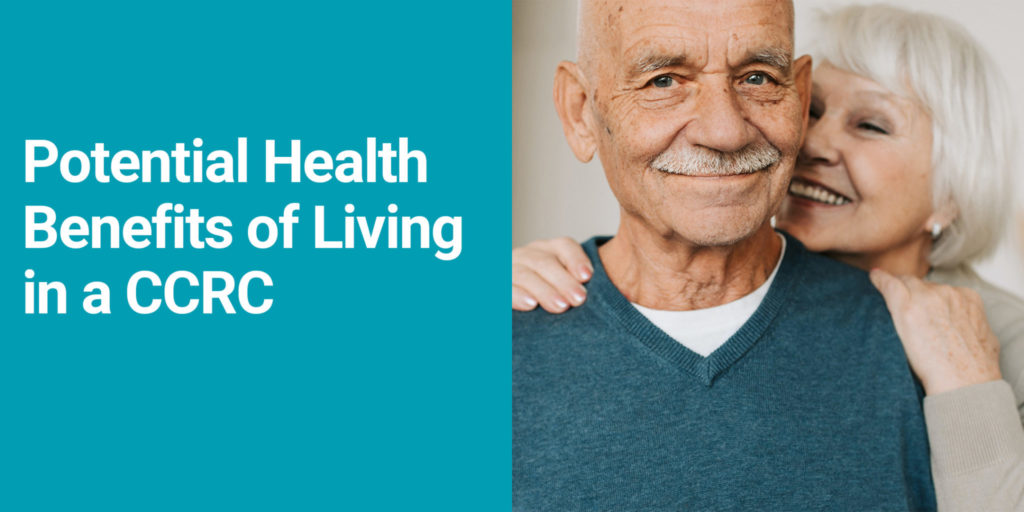 A recent study conducted in the U.K. looked at the impact that moving to a retirement community had on seniors’ health and longevity. British researchers from the Associated Retirement Community Operators (ARCO) and the County Councils Network (CCN) looked at the overall wellbeing of people who live in a retirement community as compared to seniors who have remained in their own homes.

Among the U.K. study’s findings:

Retirement communities in the United States are somewhat different from those in the U.K. For example, some U.S. senior living communities simply offer age 55+ residents independent living with some additional amenities (like a pool or clubhouse) or services (like exterior maintenance).

The findings of the U.K. study may have applicability to all U.S.-based retirement communities, though there are perhaps the most similarities between the U.K.’s retirement community model and our CCRC model since both offer residents on-site care services.

Other studies by American researchers on the health and wellbeing specifically of seniors who opt to live in a CCRC have had similar findings as the U.K. study.

For example, the 2018 Age Well Study conducted by the Mather LifeWays Institute on Aging, in conjunction with Northwestern University, found that CCRC residents report being happier and healthier than their non-CCRC-dwelling counterparts in numerous ways. The study found that:

The many benefits of choosing a CCRC

The research continues to mount that living in a retirement community, and especially a CCRC, is good for seniors’ health. With fewer hospital stays, more physical activity, and less anxiety and loneliness, the U.K. study suggests that CCRC residents may gain benefits to both their minds and bodies. This bolsters the outcomes of several other studies on senior living communities in the U.S. and abroad, including the Age Well Study.

The lockdowns caused by the COVID-19 pandemic have perhaps driven these research findings home even further. We’ve been reminded just how important it is to remain physically active and socially connected to others — two crucial benefits that CCRCs are able to offer their residents. The pandemic has shone a light on not only the resiliency of CCRC residents, but also on the excellent work these communities are doing to care for their residents.

*This blog was reproduced with the permission of the author, Brad Breeding. Brad Breeding is president and co-founder of myLifeSite, a North Carolina company that develops web-based resources designed to help families make better-informed decisions when considering a continuing care retirement community (CCRC) or lifecare community.

Independent Living: These World-Traveling Seniors Have Seen it All

Just because you live at Cottage Grove Place doesn’t mean you can’t roam the planet, too! Who says moving to a retirement

Ways to Celebrate the Holidays with Loved Ones in Assisted Living

Retirement communities offer activities that will help people stay active and engaged in life. Ready or not, the holidays are quickly